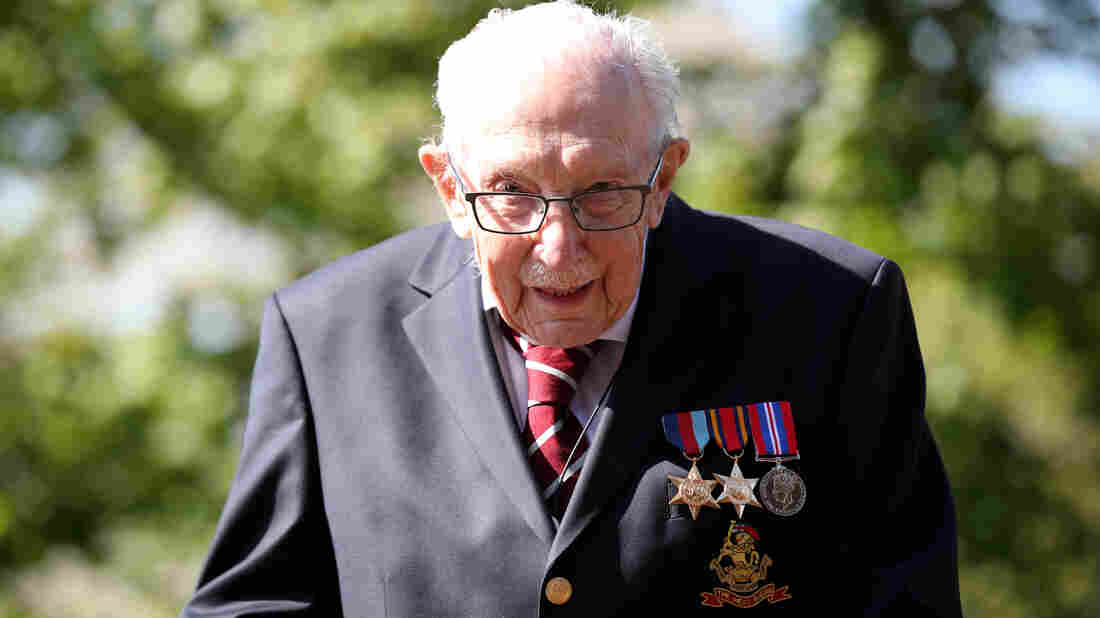 Capt. Tom Moore, 100, is being awarded a knighthood by Queen Elizabeth II after raising more than $39 million in charity for medical workers. Moore walked 100 laps in his garden to earn donations. Peter Cziborra/Reuters hide caption

Capt. Tom Moore, the British World War II veteran who raised more than $39 million to support health workers by walking 100 laps for charity in his garden, is being awarded a knighthood in recognition of how he has inspired people in the U.K. and around the world.

Moore launched the campaign in the weeks leading up to his 100th birthday in late April. Wearing a coat and tie and his military medals, he pushed his walker around the garden, hoping to draw donations.

The initial plan was to raise around $1,250 before Moore turned 100. But his fortitude and optimism in the face of the COVID-19 crisis prompted more than 1.5 million people to chip in, vaulting his efforts far above the original target. Now his selfless actions are being recognized at the highest levels.

“I’m certainly delighted and I am overawed by the fact that this has happened to me,” Moore said Wednesday, in an interview with the BBC.

Moore received an official acknowledgement of the honor after Prime Minister Boris Johnson gave an exceptional recommendation for knighthood to Queen Elizabeth II. Because of the ongoing coronavirus outbreak, it’s uncertain when or how he might undergo a special ceremony officiated by the queen.

“I’m looking forward to that,” Moore said, adding, “I hope she’s not very heavy-handed with the sword, because by then I might be rather a poor old weak soul.”

Saying he is overwhelmed by the support and affection he has received, Moore thanked the donors to his campaign and the officials who brought his knighthood about.

“I will remain at your service,” Moore said in a tweet.

1/2 A message from Tom; ‘I am absolutely overwhelmed. Never for one moment could I have imagined I would be awarded with such a great honour. I’d like to thank Her Majesty The Queen, the Prime Minister and the Great British public. I will remain at your service…

While Moore is being hailed as a hero, he reserves that title for medical staff, saying on his fundraising page, “Our fantastic NHS workers are national heroes.”

The 100-year-old has also become a surprise top-selling singer, after recording a version of “You’ll Never Walk Alone.” The song, performed with singer Michael Ball and an NHS Voices of Care choir, was a hit in Britain — and, like his walks, it raised money for NHS Charities Together.

“Let’s all carry on and remember that things will get better,” Moore said last month. “We have had problems before — we have overcome them — and we shall all overcome the same thing again.”

Congratulating Moore for his new status as Capt. Sir Tom Moore, the prime minister said via Twitter, “On behalf of the whole country, I want to say a huge thank you” for inspiring people to support charities linked to the NHS.

Moore lives in Bedfordshire, around 50 miles northwest of London. Previous recognitions for his charitable actions include a birthday card from the queen when he turned 100 on April 30, and an honorary title of colonel.

On that day, the local government of Bedfordshire also renamed a section of forest for him: Capt. Tom Moore’s Spinney.