‘My blood is boiling because of things she’s done’: Sam Armytage wants to ‘have it out’ with Annastacia Palaszczuk over her ridiculous border closure – but the Queensland premier is REFUSING to go on Sunrise

A fired-up Samantha Armytage has blasted the Queensland premier over her draconian border closures – which have torn families apart, left small towns without supplies and continue to wreak havoc on the Australian economy.

Labor premier Annastacia Palaszczuk is coming under increasing pressure to ease the hard border restrictions, which are estimated to costing businesses $17million a day.

There’s also fury about how elitist they are – especially after she let 400 AFL officials swan in to Queensland to announce the Grand Final would be played at the Gabba, but has repeatedly knocked back everyday Australians with health or family reasons for crossing the border into Queensland.

On Sunrise on Thursday morning, Armytage slammed Ms Palaszczuk, who she claimed refused to appear on the show to front up to questions about her restrictions. 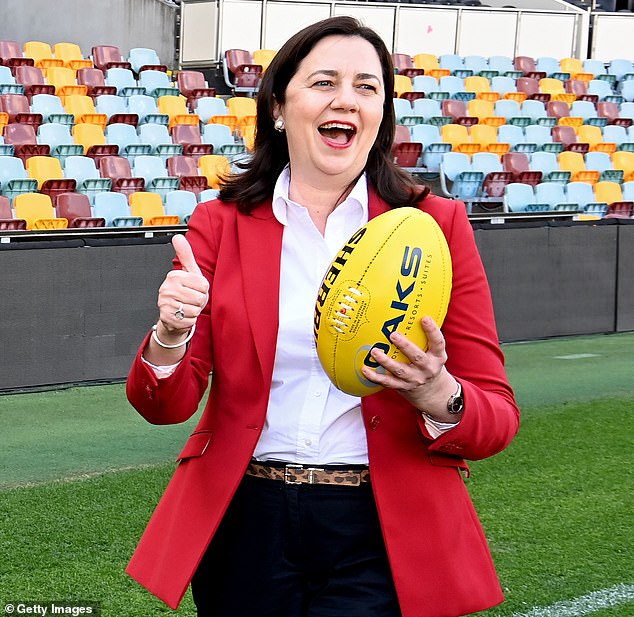 A fire tore through Mungindi, a drought-stricken town on both sides of the Queensland and New South Wales border, wiping out its only supermarket and butcher.

But due to Ms Palaszczuk’s hard border closures, locals have been forced to leave their border bubble to get essentials, or travel 160km to the nearest supermarket.

‘My blood is boiling because a lot of things she has done lately. You guys have now got no supermarket and no water and no food, basically,’ Armytage said.

‘She won’t come on the show. I am happy to have it out of there. I’m fed up of what’s what’s going on in New South Wales.’

‘Although we are in the shire we aren’t all in the bubble, only selected postcodes have been included in it,’ she said.

‘It’s completely split our shire. I’ve spoken to elderly people who are so frightened that they can’t get into Moree to go to the shops because then they’ll break the travel bubble.’ 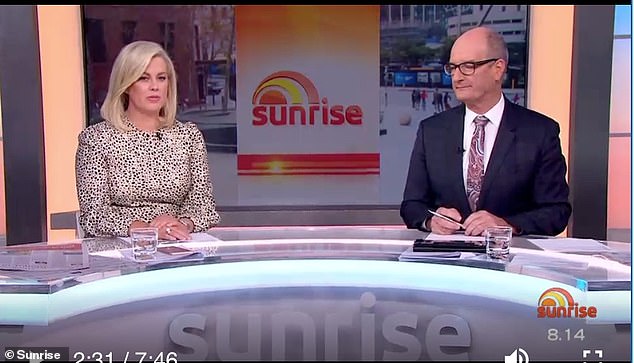 On Sunrise on Thursday morning, Samantha Armytage slammed Ms Palaszczuk, who she claimed refused to appear on the show 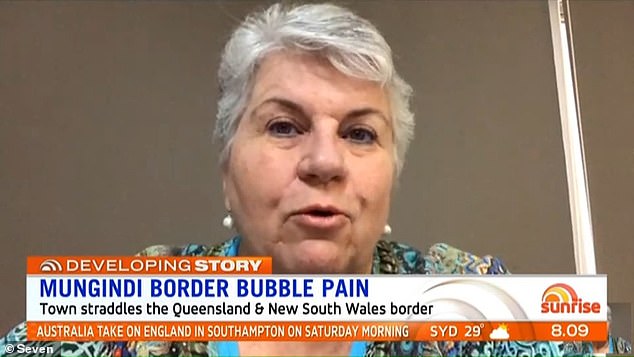 The nearest place for Mungindi residents to buy their groceries is Goondiwindi – 162km away – or into Queensland which would require them to isolate for 14 days.

‘So if they come out of Mungindi to shop in Moree or something like that they can’t then go into Queensland to have their medical issues. That is just cruel and wicked and brutal,’ she said.

Ms Humphries called on the premier to ‘stop being so heartless’ and open the border to allow Mungindi residents to buy food and access medical care.

‘It’s unnecessary. It doesn’t have to be difficult, it can be an easy fix. There are a lot of people and Mungindi that are older and need medical care. It’s a human right. It’s not that hard,’ she said.

‘We are so close to being a part of Queensland and we never imagined in a million years that through some cruel twist of fate inflamed by some airy cruel-thinking people that we would be denied access to Queensland.

Ms Humphries made an impassioned plea for the premier to ‘stop being so cruel’ and said she needs new policy advisers.

‘You’re punishing people that do not need to be punished. It is un-Australian is what it is. Please move off your pedestal, open the borders and let business go back to business and let people live their lives.’

The Queensland Government will provide $100,000 in emergency funding for temporary store to supply locals with basic essentials, but it won’t be up and running for weeks.

Ms Palaszczuk was slammed last week for saying Queensland’s hospitals were ‘for our people only’.

A heavily pregnant mother was forced to wait 16 hours for emergency surgery in Sydney after being turned away at the Queensland border, before losing one of her unborn twin babies.

Is it fair the AFL can fly into Queensland in their hundreds – while family, friends and the sick struggle to get over the border or are blocked?

Ms Palaszczuk initially did not grant the seriously ill mum-to-be’s exemption despite her needing emergency surgery for the unborn twins.

The mother, from Ballina in New South Wales which is 88km from the Queensland border, had twins who were just 24 weeks along and needed urgent care.

She wasn’t initially granted an exemption to cross the border for surgery at the Gold Coast University Hospital 125km away and instead had to wait for 16 hours in Lismore for a flight to Sydney.

The woman’s father Allan Watt says one of the twins became anaemic during surgery at Royal Prince Alfred Hospital in Sydney.

Mr Watt said the family were very upset about his daughter being denied an exemption.

Queensland Chief Officer Dr Jeannette Young said the NSW woman’s exemption had been approved as soon as her application had been made.

Ms Palaszczuk had said last week while she was not aware of the specifics of the case, the decision about who to let into Queensland would be made by health professionals, not politicians. 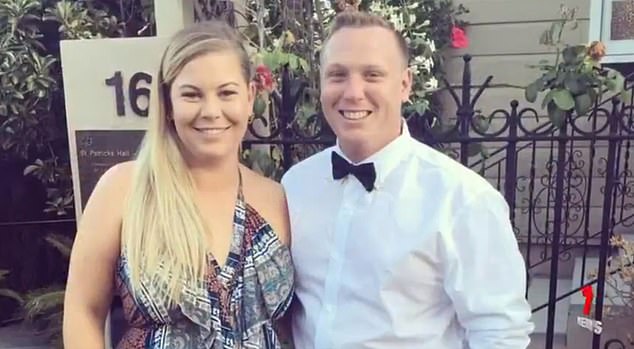 A heavily pregnant mother was forced to wait 16 hours for emergency surgery in Sydney after being turned away at the Queensland border, before losing one of her unborn twin babies

‘People living in NSW have NSW hospitals. In Queensland, we have Queensland hospitals for our people,’ she said.

Meanwhile, a Queensland grandmother was forced to recover from brain surgery in a quarantine hotel, while AFL officials have been exempt from strict quarantine rules.

The grandmother-of-seven requested an exemption from hotel quarantine to self-isolate at home on the Sunshine Coast, but was rejected twice. 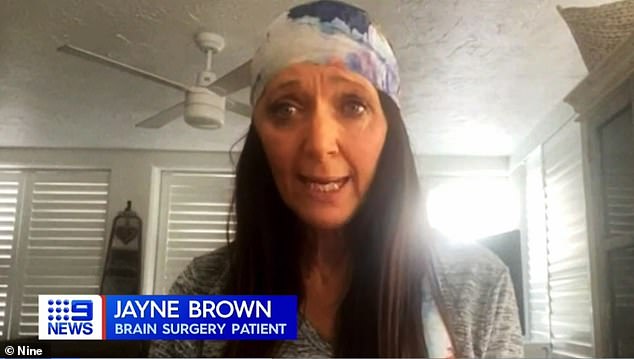 Meanwhile, a Queensland grandmother was forced to recover from brain surgery in a quarantine hotel, while AFL officials have been exempt from strict quarantine rules 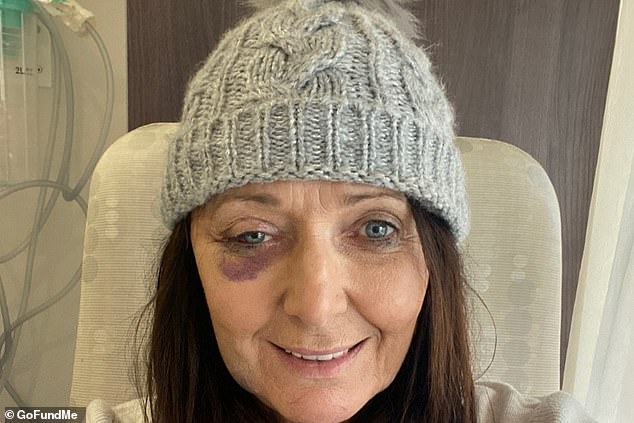 She blasted Queensland the premier, who allowed 400 AFL players and officials from coronavirus-riddled Victoria to enter the state on Tuesday night.

Not even a letter from Dr Teo himself could convince Queensland officials to change their mind and allow Ms Brown and her husband to isolate at their home.

Instead, she struggled through hotel confinement in agony unable to walk and limited access to pain relief.

‘I was in a wheelchair, I couldn’t walk, my right leg was compromised, it was numb, it was weak, I couldn’t stand on it,’ she said.

‘I wasn’t well at all and got shuffled into a five-by-five hotel room and just left there.’

The stern criticism of Ms Palaszczuk’s border closure comes after New South Wales premier Gladys Berejiklian made a scathing review of her counterpart.

‘Can I be absolutely frank, she has made a decision and isn’t willing to talk about that decision and is refusing to budge,’ Ms Berejiklian told 2GB radio station. 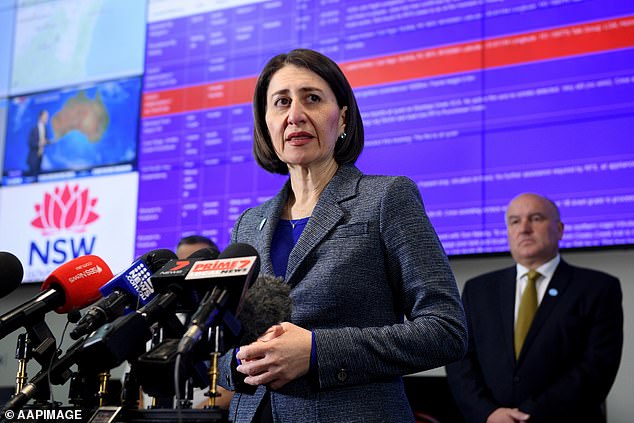 NSW Premier Gladys Berejiklian on Wednesday made a scathing review of Ms Palaszczuk’s border restrictions, saying the Queensland premier is ‘refusing to budge’ on closures 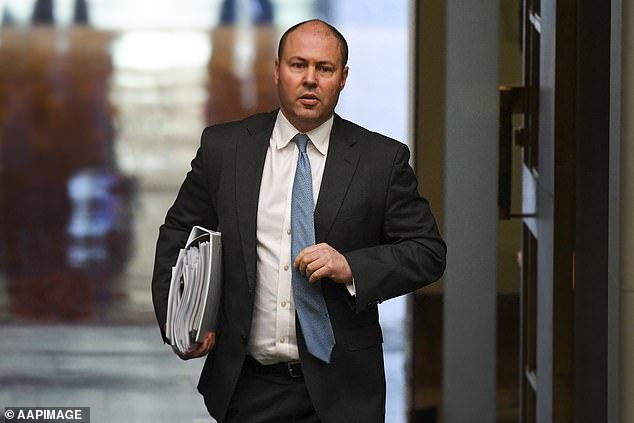 Former Queensland premier Campbell Newman tweeted: ‘So if you are AFL royalty you can get into Queensland, with your family, but if you live in northern NSW with your seriously ill child you can’t’

‘It’s not through want of trying. I’ve tried to establish a positive relationship but it’s a bit difficult when decisions are made without them even telling us.

‘And can I compare that to [Labor’s Victorian Premier] Dan Andrews and the Prime Minister, the three of us worked together on a very difficult decision on the Victoria-NSW border, and I’d like to see that applied to all borders.’

The Queensland Premier proudly announced that she’d secured the landmark match on Tuesday alongside AFL CEO Gil McLachlan, who was granted an exemption to fly in to the Sunshine State for the announcement.

The Gabba in Brisbane was awarded AFL’s showpiece event over Perth‘s Optus Stadium and the Adelaide Oval on Wednesday.

But Mr Frydenberg, along with hordes of others, have argued the celebrations were insensitive to families who had been barred from entering Queensland.

‘I think the Queensland Premier has got some questions to answer here,’ he told A Current Affair on Wednesday night.

‘How can it be okay for people to go up to prepare for a footy game, and its not okay to go to hospital for treatment?’