The Reserve Bank of Australia has left interest rates on hold at a record-low of 0.25 per cent but warned of Great Depression levels of unemployment.

Governor Philip Lowe didn’t mention the 1930s but feared the jobless rate could be worse than the 10 per cent level forecast by the central bank if coronavirus restrictions weren’t eased soon.

‘If the lifting of restrictions is delayed or the restrictions need to be reimposed or household and business confidence remains low, the outcomes would be even more challenging than those in the baseline scenario,’ he said in a statement on Tuesday.

Under the RBA’s ‘baseline scenario’, unemployment is set to almost double from 5.2 per cent in March, before the COVID-19 shutdowns, to 10 per cent by June.

Australia hasn’t had a jobless rate in the double digits since April 1994, as unemployment remained high after the 1991 recession.

The national jobless rate peaked at 11.2 per cent in December 1992 so a level that creeps above that would the worst since the 1930s Great Depression. 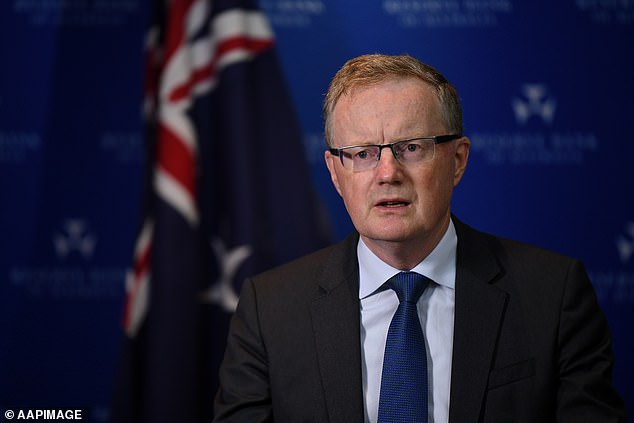 The Reserve Bank of Australia has left interest rates on hold at a record-low of 0.25 per cent but warned of Great Depression levels of unemployment. Governor Philip Lowe feared the jobless rate could be worse than the 10 per cent level forecast by the central bank if coronavirus restrictions weren’t eased soon

The RBA last month forecasting unemployment peaking at 10 per cent before falling back to seven per cent by the end of 2021 – itself a level unseen since September 1999.

‘In the baseline scenario considered by the board, the unemployment rate peaks at around 10 per cent over coming months and is still above seven per cent at the end of next year,’ he said.

‘A lower unemployment rate than this is possible if the reduction in labour demand is accompanied by a larger reduction in average hours worked, rather than by people losing their jobs.’

Dr Lowe’s monthly interest rate decision for May was announced at 2.30pm AEST, an hour after Treasurer Josh Frydenberg hinted cafes and restaurants would be among the first to open as coronavirus restrictions were eased.

‘Opening our cafes and restaurants will mean that farmers will have a home for their produce,’ he told the National Press Club in Canberra.

Mr Frydenberg, the Liberal Party’s deputy leader, did not set a timetable to reopen the economy but talked up the benefits of restarting the hospitality sector – the worst hit by the shutdowns.

‘We have actually now seen rains in recent weeks and months that is making a real difference to the capacity of the farmers to produce more from their land,’ he said.

‘So, we need to find a home for that produce and getting those cafes and restaurants and other activities open as quickly as possible will be a way of getting more people back to work and reducing that unemployment.’

Prime Minister Scott Morrison highlighted the same issue when he spoke to reporters this afternoon.

‘When restaurants and cafes are closed, they are not buying from producers like they were before and so there is a compounding of the effect,’ he said.