Parents have thanked a mother for ‘blowing their minds’ with a little-known trick that transforms a McDonald’s Happy Meal box into a disposable plate in seconds.

British woman Rebecca Maufe shared a clip on her TikTok profile ‘Mum Life My Life’, revealing a hidden tab on one side of the children’s takeaway box.

When pulled, the tab separates the cardboard folds of the bottom, causing the box to collapse. The top can then be discarded and the base used as a disposable plate.

The video has racked up almost one million views from Macca’s fans who say they are astounded by the revelation that will save countless households time washing up after.

‘Eating my happy meal in the car as a kid could’ve been so much easier if I knew this back then,’ one person said. 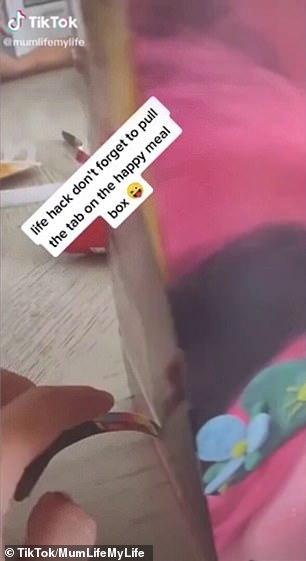 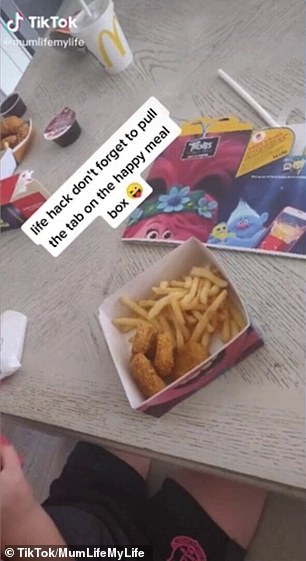 Another said: ‘This mum thanks you for blowing her mind.’

A woman who worked at McDonald’s for years said she had never seen or heard of the trick until watching Ms Maufe’s video, which is the latest clip to go viral on TikTok.

Last week, Australian mother Emily Rumbold was shocked when footage of her wearing a packet of wet wipes as a makeshift face mask spread like wildfire online.

Wearing a pair of over-sized sunglasses, the 36-year-old opens the flip-top lid and takes a sip from a glass of white wine before pressing it shut again.

‘Doing my bit to stop the spread [of coronavirus],’ the mum-of-seven from Gippsland, country Victoria, wrote in the bottom corner of the video.

Having fashioned the DIY face-covering from empty Aldi baby wipes, Ms Rumbold posted the footage in a Facebook group dedicated to the German discount supermarket.

She was quickly inundated with thousands of likes and shares from members who said she had brightened their day with the lighthearted clip. 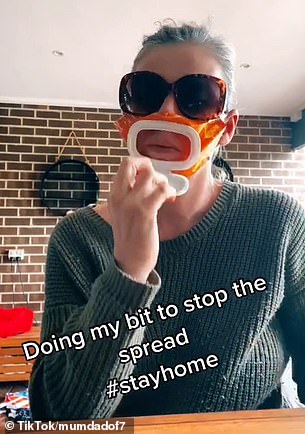 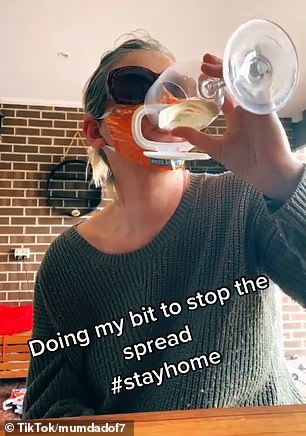 Ms Rumbold told Daily Mail Australia she had joined TikTok during the first lockdown in March ‘for a bit of fun’ and never expected her videos to be seen by such a large audience.

‘Without trying to take away the seriousness [of the second wave of infections] I just wanted t’o have a bit of fun with it,’ she said.

‘There’s been lot of mask videos going around and I thought I’d join in.’