What is the wokest man in sport doing hanging out with the unacceptable face of capitalism? BLM and green campaigner Lewis Hamilton and his ‘new love’ live it up on Philip Green’s £100m yacht in Corsica

By Ciara Farmer For Mailonline

Formula One ace Lewis Hamilton has become known as one of the ‘wokest’ men in sport, while his good pal Philip Green is well-known for his controversies and scandals.

Yet the pioneering sportsman, 35, who was joined by model Florence Mueller, proved their friendship defies their politics as he was seen living it up on the disgraced fashion tycoon’s £100m superyacht, Lionheart on Monday.

It is the second time Lewis and his rumoured love interest Florence have joined the Topshop boss on his yacht, which is complete with helipad, pool, 15 crew cabins and room for 12 guests,as they have been taking to the highs seas between Lewis’ stints at the Formula One last weekend.

The appearance comes just days after the fashion mogul issued a grovelling apology in a humiliating U-turn over plans to exploit the government’s furlough pay cut loophole to reduce payments to staff his company Arcadia was making redundant.

Lewis, who hit headlines at the F1 over the weekend when he took a knee wearing a black T-Shirt with the message ‘Arrest the cops who killed Breonna Taylor’, has frequently spent time with Philip and the Green family, with the friendship seemingly blossoming at the 2015 Met Gala, where Lewis wore a Topshop suit. 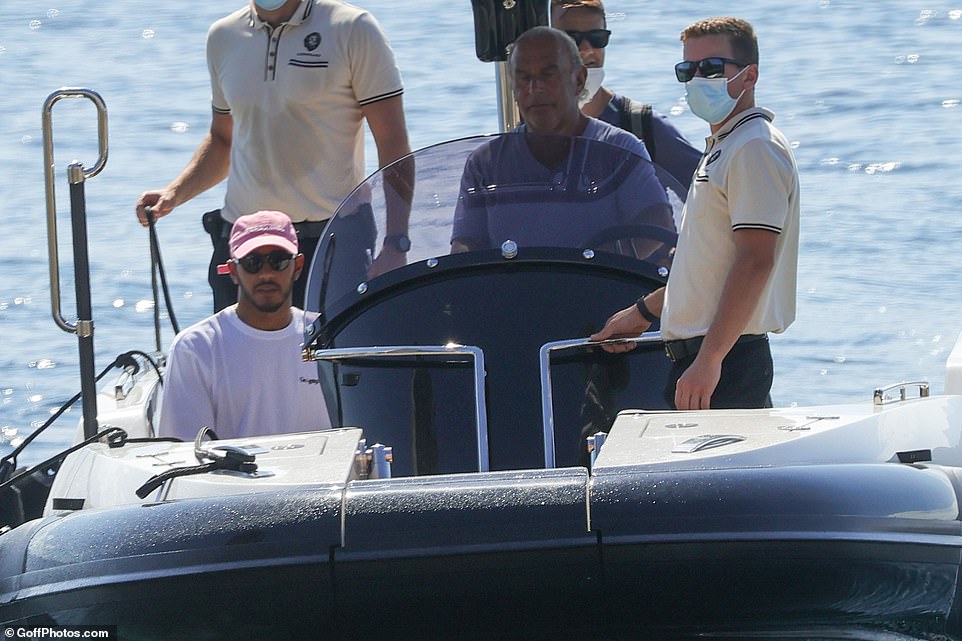 Heading off: Lewis Hamilton has become known as one of the ‘wokest’ drivers in Formula One, while his good pal Philip Green is well-known for his controversies and scandals, yet they maintain a friendship and were seen together on Monday on the latter’s yacht

In 2015, Lewis thanked Phillip for ‘hooking him up’ with his invite to the prestigious Met Gala, where he wore Topman. Joined by Emily Ratajkowski, Bella Hadid, Hailey Baldwin and a host of other megastars who all wore custom Topshop to the event, Lewis sported the high street store for the most important night in fashion.

Since then, the duo have been spotted together in both a friendship and professional capacity, with Lewis often hanging out with Philip’s daughter Chloe. Like the Greens, Lewis owns property in tax-free Monaco, where he is believed to have a home in the exclusive Fontvieille district.

Lewis has been hitting headlines of late thanks to his admirable attempts at shining light on the Black Lives Matter movement in Formula One racing and it was announced on Tuesday that he has avoided any action by Formula One’s governing body for the T-shirt he wore at Sunday’s Tuscan Grand Prix.

Ahead of Sunday’s race, Hamilton took a knee wearing a black T-Shirt with the message ‘Arrest the cops who killed Breonna Taylor’, which sparked investigation. 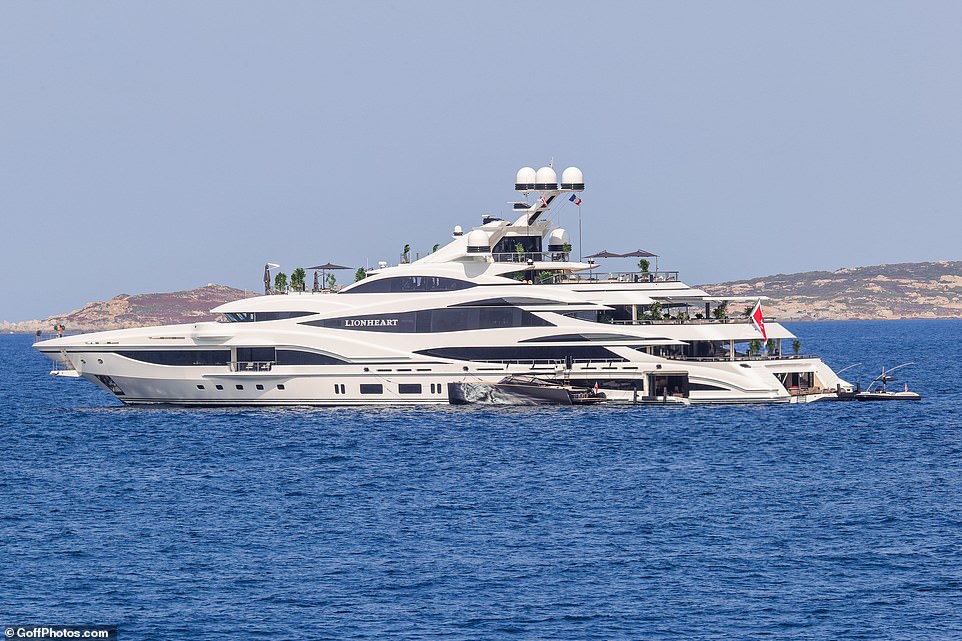 Wow: It is the second time the duo have joined the Topshop boss on his £100m yacht which is complete with helipad, pool, 15 crew cabins and room for 12 guests, 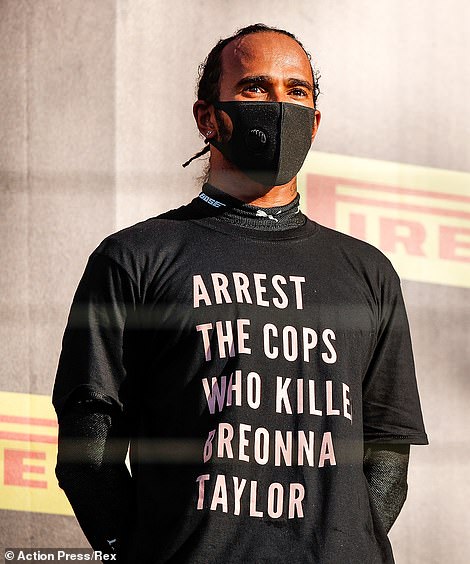 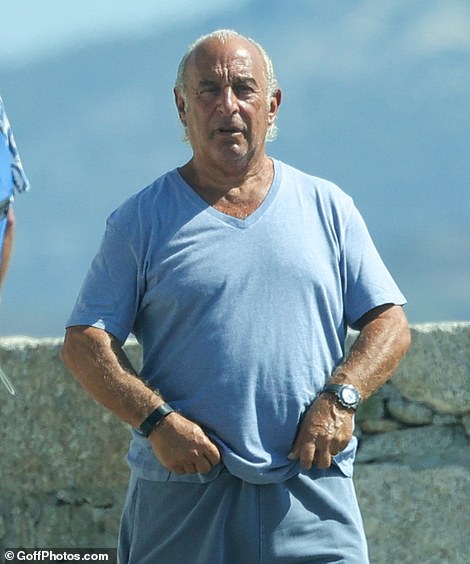 Bold: Lewis hit headlines at the F1 over the weekend when he took a knee wearing a black T-Shirt with the message ‘Arrest the cops who killed Breonna Taylor’ 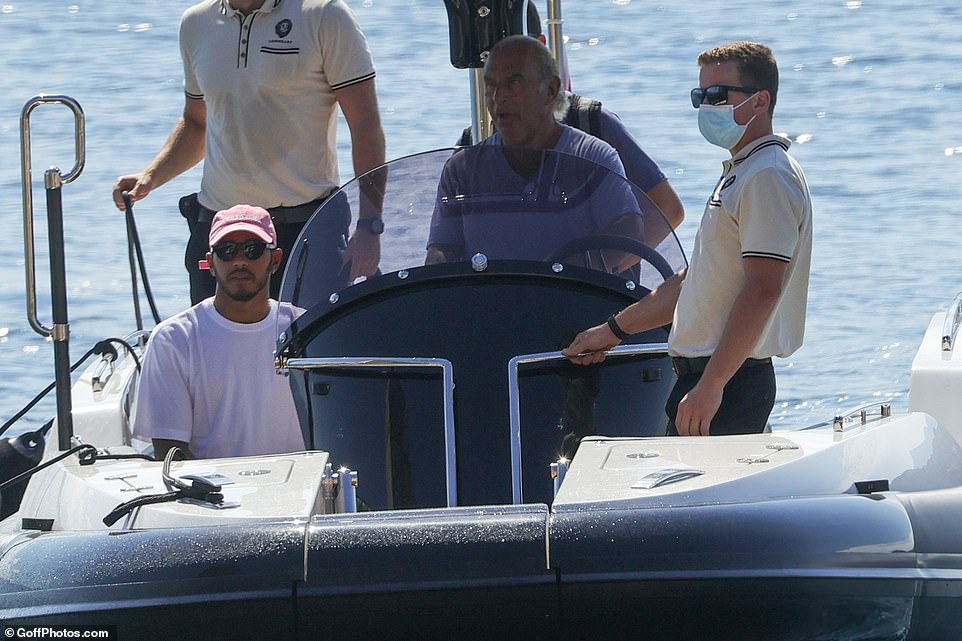 The boys: The unlikely friends spent some quality time together on the high seas

Taylor, a 26-year-old black woman, was shot dead by police in her Louisville home six months ago. He then wore the T-shirt for his post-race interview, broadcast to millions around the world, before collecting the winner’s trophy and standing on the podium in the same clothing.

Philip meanwhile has been hitting headlines for very different reasons than his crusading pal.

In a humiliating U-turn, the tycoon’s retail empire issued a grovelling apology at the weekend for plans to exploit furlough rules to reduce payments to staff who it was making redundant.

Arcadia Group, which has taken tens of millions of pounds in taxpayer-funded furlough money, was savaged after it emerged that employees who were losing their jobs would miss out on money during their notice period.

In an extraordinary statement, the company crumbled, axeing the plan and apologising to its employees. Sources close to Sir Philip said he had ordered the U-turn after learning of the details of the proposed pay cut.

‘We recently implemented a policy for those employees who are working their notice on furlough to receive their furlough pay instead of their full pay,’ the company said in its statement. 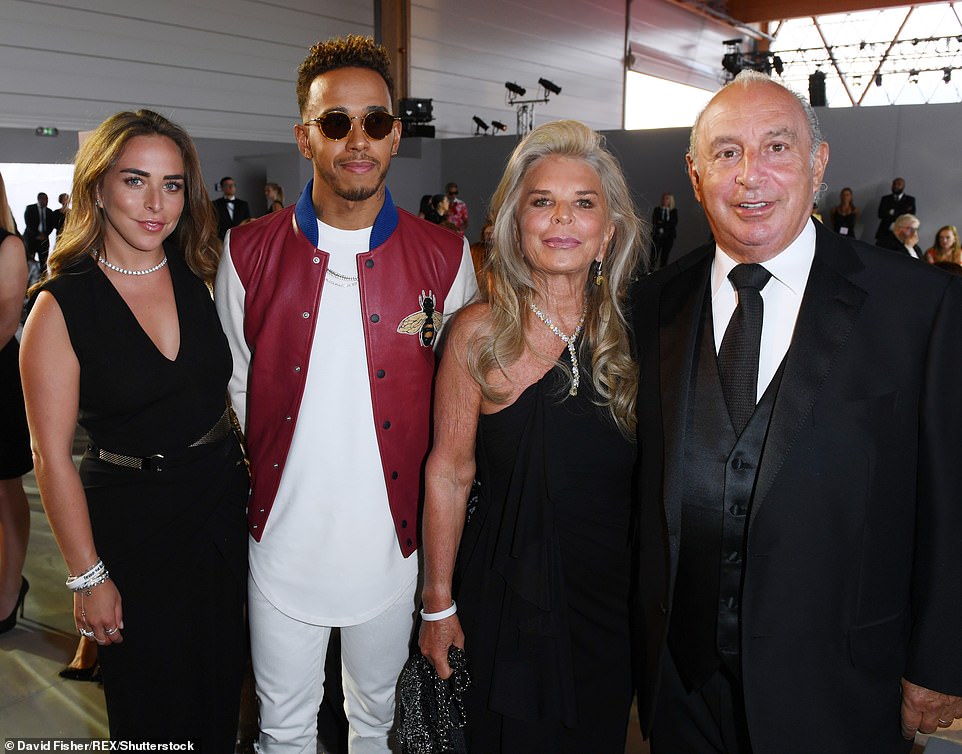 The whole clan: Lewis has frequently spent time with Philip and the Green family, with the friendship seemingly blossoming at the 2015 Met Gala, where Lewis wore a Topshop suit (Lewis with Chloe, Tina and Philip Green in 2017)

‘We got this decision wrong and the board has today amended this policy to ensure all affected employees will receive their full pay. They will be notified of this decision immediately.

‘We are extremely sorry to all those individuals impacted for the distress that we have caused and apologise unreservedly.’

Arcadia, which includes the fashion brands Topshop, Miss Selfridge and Dorothy Perkins, is making 300 staff redundant at its head office after sales slumped during the coronavirus lockdown.

But it was revealed that bosses had planned to take advantage of a loophole in rules allowing it to pay axed staff at reduced rates during their notice period.

Arcadia made 300 staff at its head office redundant and paid then reduced rates for their notice period through a loophole in the government rules. 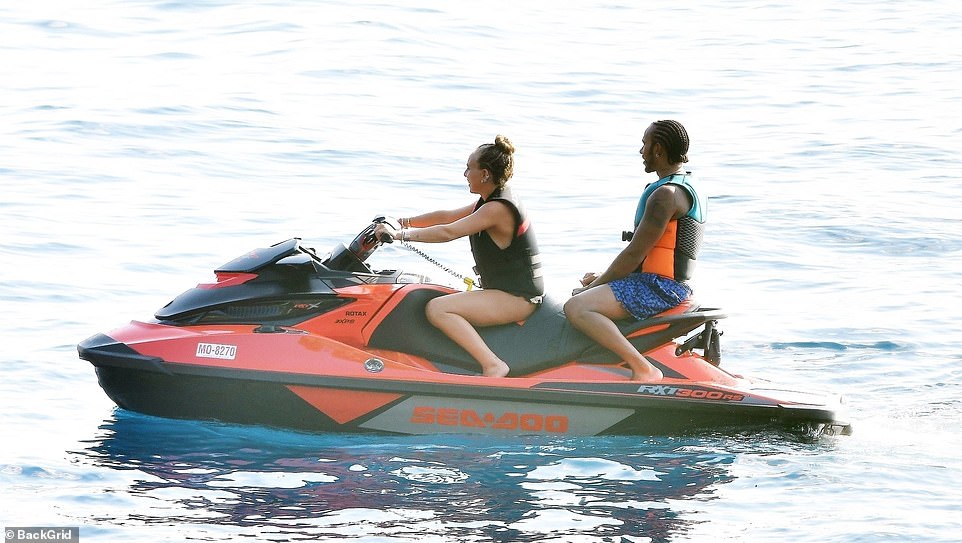 Lavish: Lewis did little to quash rumours of a romance with model Florence Mueller as they were seen taking to the high seas 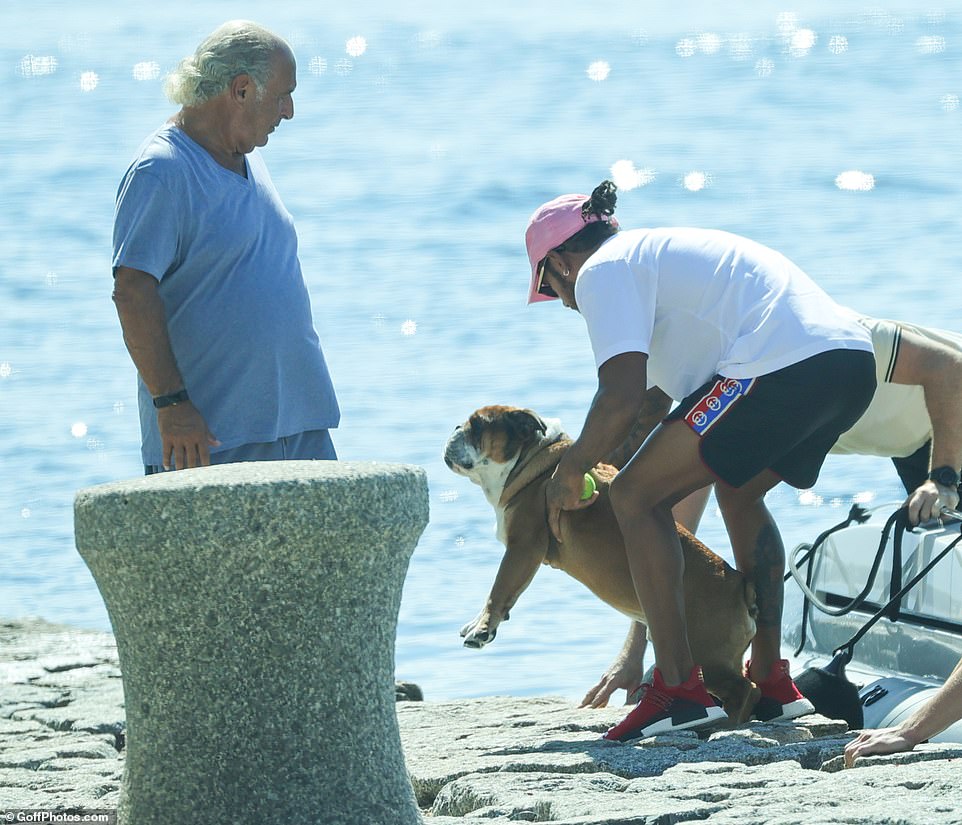 A helping hand: Lewis was hoisting his beloved pup on to dry land while Philip looked on 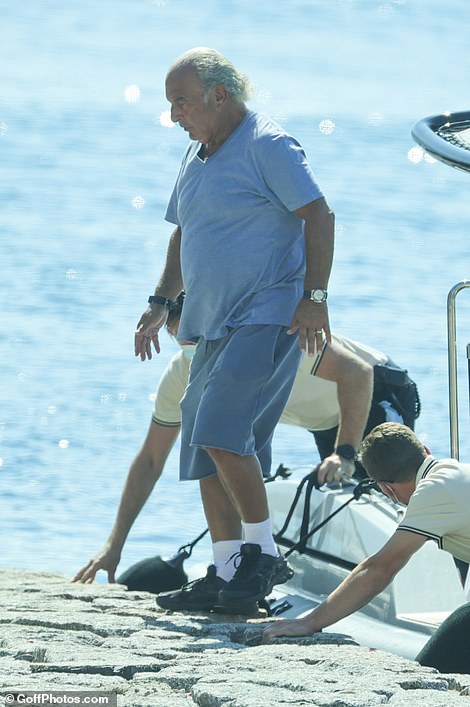 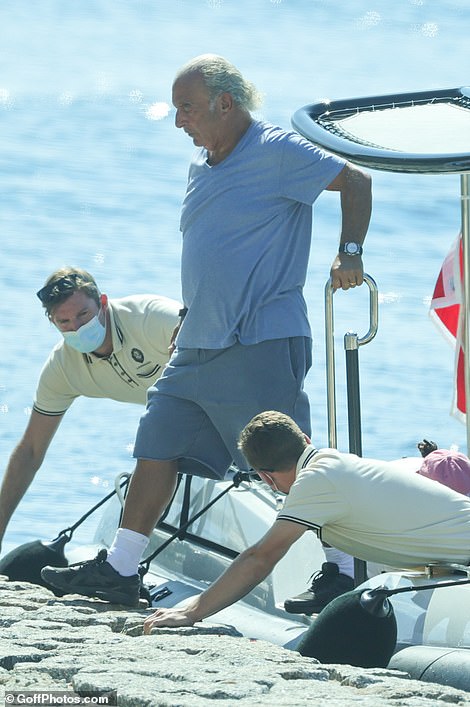 All hands on deck: The tycoon was assisted by loyal aides as he strutted off the boat

Since July, companies have been required by law to pay full pre-coronavirus salaries to those who have been made redundant and who are serving a statutory notice period. But the rule does not apply to employees whose contracts include a longer notice period, which is the case for many of Arcadia’s head office staff.

Arcadia seized on the loophole to pay these staff according to their furlough – and not their pre-crisis – rates of pay.

One executive at Arcadia reportedly told staff that the company needed to take ‘every penny we can get’ of public money. It would have saved the retail empire less than £1million.

The move meant some higher-earning staff were set to receive just 50 per cent of the notice period pay they would have been entitled to if Arcadia had not taken advantage of the furlough scheme.

A senior employee earning £100,000 would, for example, normally have been paid a full monthly salary of £5,553 during their notice period, but would have received just £2,777 under the ditched plan. 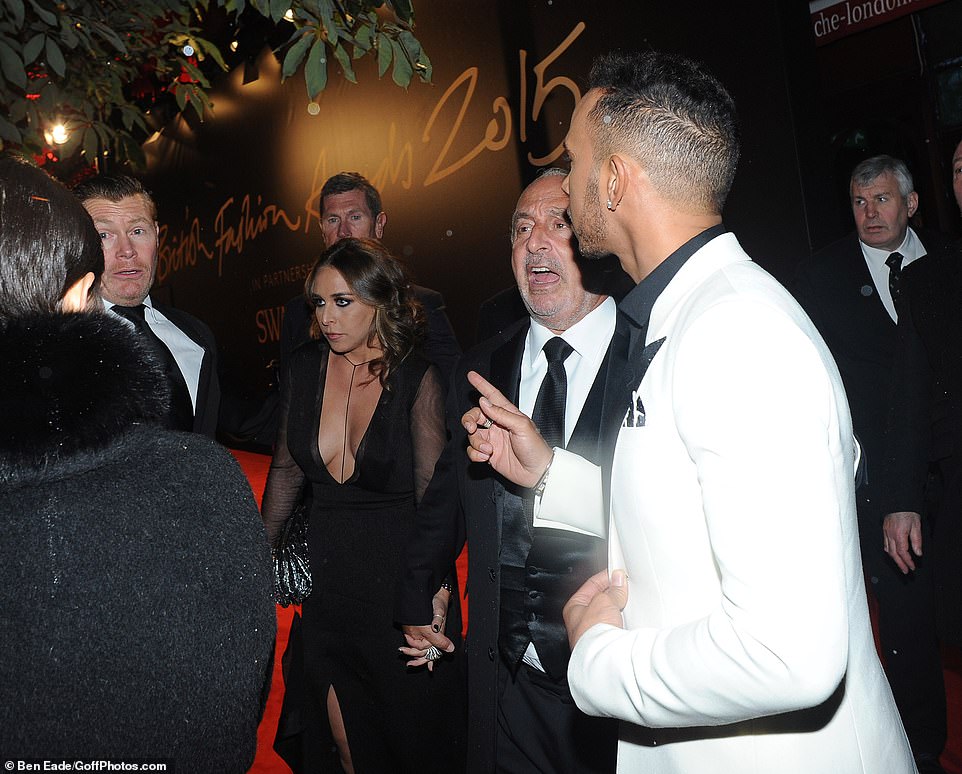 Hanging out: Friend of the family Lewis is seen leaving the 2015 British Fashion Awards with Chloe and Philip

The company’s stance was in stark contrast to other big chains, including John Lewis, Marks & Spencer, WH Smith, Boots and Dixons Carphone, which say all redundancy packages are based on full pay.

While Lewis has made his anti-racism crusade well-known, Philip was hit with shocking allegations in 2018. It was claimed that he had perpetrated racism and sexual harassment – yet at the time he told The Mail on Sunday he had suffered ‘the worst week of my life’.

The Topshop boss was identified as the man who had taken out an injunction preventing publication of allegations about his harassment of staff, which he strenuously denies.

Speaking after the scandal erupted, the Topshop owner said that he had indulged in nothing more than ‘banter’ with his staff, claiming he had a good relationship with those who worked for him.

He added: ‘I’m very, very, very upset. I’m being used as target practice when there is zero [evidence] that anyone has turned up with. It’s injuring my business, all the people potentially working in the business, and it’s injuring me and my family.’

Good pals: Florence certainly proved her model credentials as she walked ahead of the F1 ace, who was in a more pared-back ensemble than his favoured wild looks 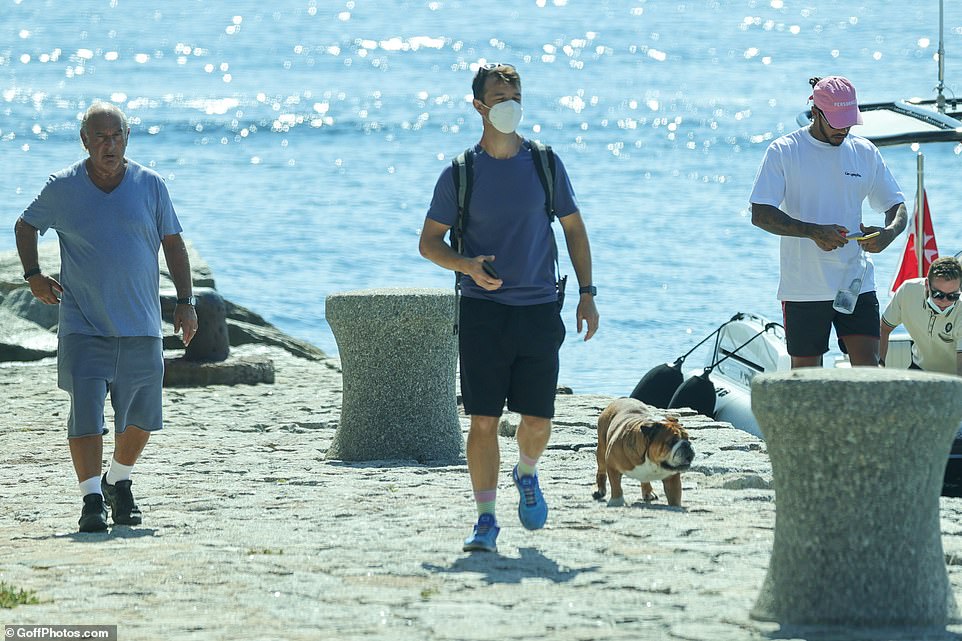 The whole gang: Philip walked alongside Lewis and another member of their party 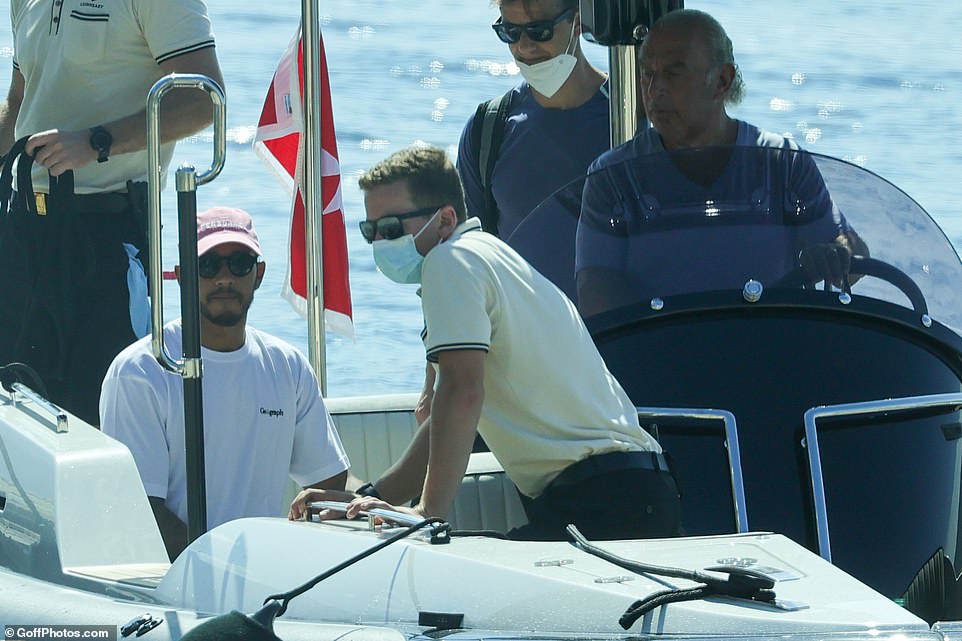 Aside from his unusual friendships, Lewis’ love life has again been hitting headlines since he has been spotted out and about with stunning model Florence during his time off.

Florence is part of Next Model Management’s Miami roster and also works with Click Models, she is fluent in English, Spanish, and German and also has her own Only Fans account. With her long limbs, toned abs and luscious raven locks, Florence bore a striking resemblance to his former flame, Nicole Scherzinger.

But a source speaking to The Sun on Sunday claimed that Lewis and the model were strictly friends, as they claimed they were ‘just good mates.’The inside said: ‘Lewis and Florence aren’t dating, they’re just good mates. She joined him on the boat as part of a group of pals with Lewis.

‘They get on but there’s nothing romantic going on between them at the moment.’ MailOnline has contacted Lewis’ representatives for comment.

Lewis and Nicole called time on their on and off eight year relationship in 2015 but have remained amicable, reuniting last year at the Fashion Awards in London in December.

Speaking about their split during an appearance on The Jonathan Ross Show, Nicole revealed: ‘I don’t see anything negative.

‘I think it’s quite natural when people separate and go their own ways and you just have to be adult about it and just always wish the other person happiness, success and love like sincerely and I do.’

When asked whether they still stay in touch, the Poison hitmaker – who first started seeing the race car driver in 2007 – was frank in her admission. 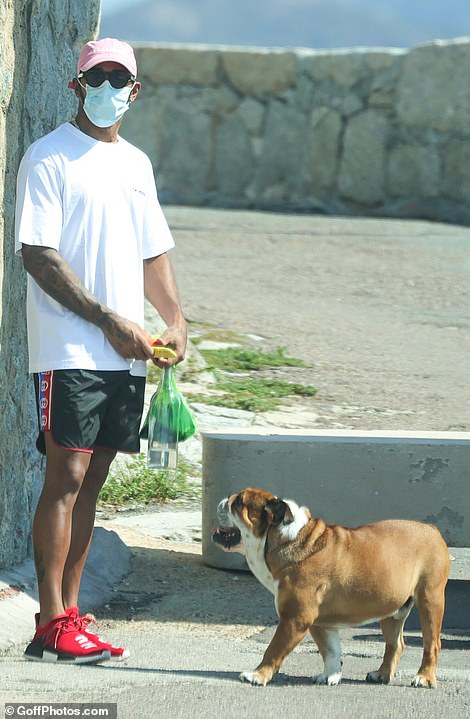 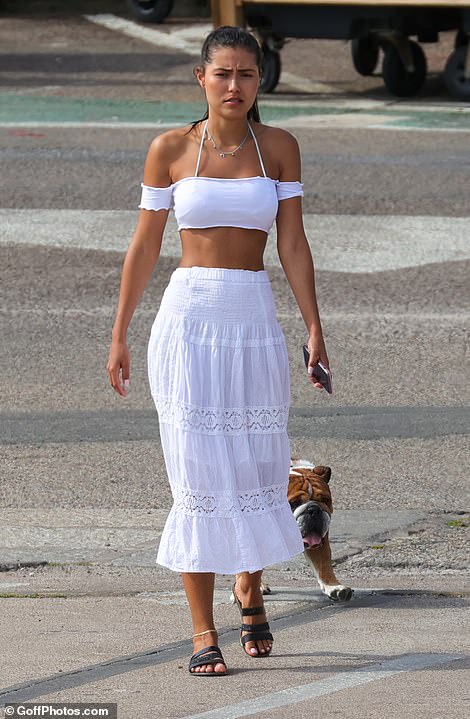 Loyal companion: As ever, Lewis’ pet bulldog Roscoe was never far from his side

She added: ‘Yeah we don’t, like, talk. I think that he is the best driver since Ayrton Senna and I think that he’s probably going to win this year and I only wish him happiness and success.’

They may have been dating for less than a year, but Nicole and Thom are clearly devoted to one another and divide their time between her LA pad and London. 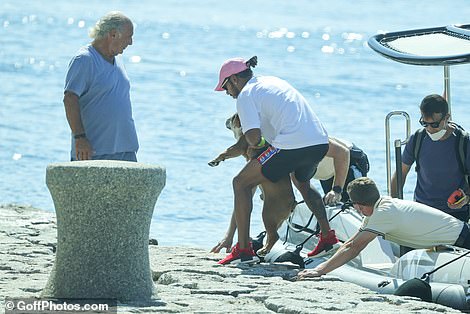 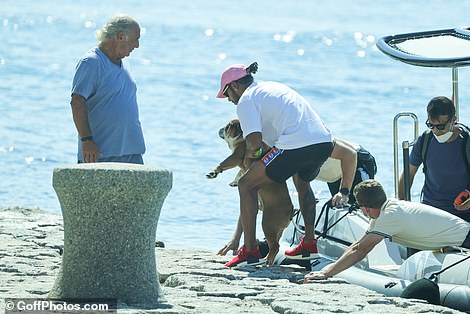 His baby: Lewis tenderly helped Roscoe on to the shores although his pal wasn’t much help