Here’s what you need to know:

With a resurgence across the South and West, the U.S. hits another record for new cases.

More than 47,000 coronavirus cases were announced across the United States on Tuesday, the most of any day of the pandemic. Officials in eight states — Alaska, Arizona, California, Georgia, Idaho, Oklahoma, South Carolina and Texas — also announced single-day highs.

Tuesday was the fourth time in a week that the United States posted a new single-day case record.

The number of new cases in the United States has shot up by 80 percent in the past two weeks, according to a New York Times database.

The increase in infections came as the leaders of the most populous counties in Texas pleaded with Gov. Greg Abbott to allow them to issue stay-at-home orders. “We are having an experiment, a gamble, in the hopes that we can be the first community that suddenly flattens the curve without a stay-at-home order,” said Lina Hidalgo, the executive in Harris County, which includes Houston, the hardest-hit area of the state.

California’s case count has exploded in recent days — leading the governors of New York, New Jersey and Connecticut to tell travelers from California to quarantine for 14 days, joining the ranks of travelers from other hard-hit states.

And even states that had reported improvements are starting to see the number of new cases rise, causing governors to rethink their plans to get residents back to work.

The Midwest, which had been a national bright spot, is now seeing the beginnings of a resurgence in coronavirus cases. And even in places where case numbers have remained mostly flat, like Illinois and Minnesota, new hot spots have emerged.

The record comes as Dr. Anthony S. Fauci, the nation’s top infectious disease expert, testified before Congress on Tuesday that the rate of new coronavirus infections could more than double to 100,000 a day if current outbreaks were not contained. He warned that the virus’s march across the South and the West “puts the entire country at risk.”

Dr. Fauci offered his grim prediction while testifying on Capitol Hill, telling senators that no region of the country is safe from the virus’s resurgence.

“I can’t make an accurate prediction, but it is going to be very disturbing, I will guarantee you that,” Dr. Fauci said, “because when you have an outbreak in one part of the country, even though in other parts of the country they are doing well, they are vulnerable.” 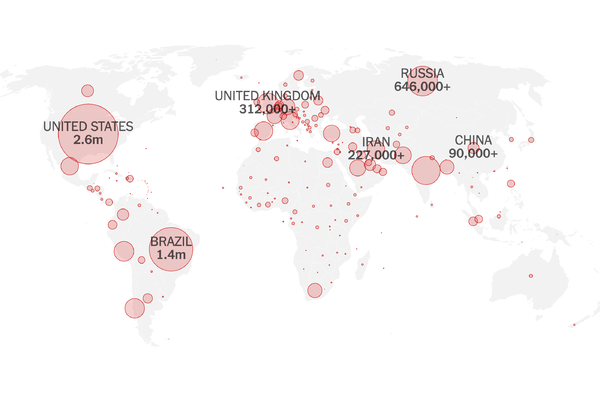 The virus has infected more than 9 million people and has been detected in nearly every country.

The European Union reopens its borders to international travelers and relaxes restrictions.

The European Union reopened its borders on Wednesday to visitors from 15 countries, excluding the United States, Russia, and Brazil, and many European countries further eased pandemic restrictions.

Spain and Portugal are officially reopening their land border, an event that will be attended by King Felipe VI and the prime ministers of both countries. The border had been closed since mid-March. Spain reopened its border with France on June 21.

In Belgium, swimming pools, wellness centers, amusement parks, casinos and indoor playgrounds were among the spaces to reopen. Cinemas and theaters also opened on Wednesday.

Visitors also returned to a growing list of museums, including the Grand Palais and Centre Pompidou in Paris, and the Museum of Cycladic Art in Athens.

In the Netherlands, gatherings of up to 100 are now allowed, although the government urged people stay five feet (1.5 meters) apart. Sex workers in the country are also allowed again.

Some countries in the Middle East also relaxed virus-related measures on Wednesday. Restaurants in a few tourist areas in Qatar were allowed to reopen under some restrictions. Malls and shopping centers in Qatar also opened their doors, but prayer rooms and cinemas were among the spaces to remain closed.

Some flights in Lebanon and Egypt also resumed. EgyptAir began service to more than two dozen international destinations on Wednesday.

Senate approves an extension to the Paycheck Protection Program.

The Senate on Tuesday approved extending the application period for a relief program for small businesses, granting five additional weeks for the remaining money left in the program to be spent.

Less than four hours before the Paycheck Protection Program was scheduled to close with $130 billion still available for loans to small businesses seeking to maintain their payrolls, the Senate approved extending the application period and allowing small businesses to receive aid until Aug. 8.

The legislation now heads to the House, which had finished voting before the bill cleared the Senate, and will require President Trump’s signature for the program to continue. Members of both chambers are expected to leave Washington for the Fourth of July and are not set to fully return for two weeks.

The unexpected approval of the extension, which required agreement from all 100 senators, came as lawmakers began to debate the contours of another coronavirus relief package. With multiple parts of the $2.2 trillion stimulus law set to expire at the end of this month and new outbreaks forcing many states to slow efforts to reopen their economies, lawmakers widely recognize that another measure will be necessary.

They lost 5 relatives to the virus. Now they want to help others.

Over the past three months, the virus has brought a devastating loss to one New Jersey family, the Fuscos: It has killed their mother, three siblings and an aunt, and infected at least 19 other family members.

Those who survived did not emerge unscathed.

Joe Fusco, 49, lost 55 pounds and spent 30 days on a ventilator. His sister Maria Reid, 44, cannot shake the memory of the disjointed hallucinations that dogged her during the 19 or 20 days she was unconscious, or the terror of waking up convinced that her 10-year-old daughter was dead.

The Fuscos were unwilling pioneers charting an early course through all that was unknown about a virus that has killed more than 127,000 people in the United States. They are now trailblazers of another kind as the subjects of at least three scientific studies.

Their help may prove useful well should a predicted second wave hit.

The Fuscos can see little logic in the virus’s path.

Mr. Fusco said he remained frustrated by the lackadaisical attitudes of people shown crowding together near beaches or outside bars without masks.

“These idiots are out there and not taking precautions,” he said.

In New York City, surviving the virus may come down to which hospital admits you.

In Queens, the borough with the most coronavirus cases and the fewest hospital beds per capita, hundreds of patients languished in understaffed wards, often unwatched by nurses or doctors. Some died after removing oxygen masks to go to the bathroom.

In hospitals in other impoverished neighborhoods around New York City, some critically ill patients were put on ventilator machines lacking key settings, and others pleaded for experimental drugs, only to be told that there were none available.

It was another story at private medical centers in Manhattan, which have billions of dollars in endowments and cater largely to wealthy people with insurance. Patients there got access to heart-lung bypass machines and specialized drugs like remdesivir, even as those in the city’s community hospitals were denied more basic treatments like continuous dialysis.

In its first four months in New York, the coronavirus tore through low-income neighborhoods, infected immigrants and essential workers unable to stay home and disproportionately killed Black and Latino people, especially those with underlying health conditions.

As the Caribbean reopens, it faces hurricane season, pandemic-related restrictions and the absence of cruise ships.

The pandemic struck the Caribbean at the height of high season, when snow birds, primarily from the United States, pack the beaches for winter and spring break, and provide the revenue to see resorts and sometimes entire countries through the lull of summer and fall.

Now, as the region begins to reopen to international travelers, it faces not just the challenge of the pandemic, but the financial blow dealt by the absence of cruising and the onset of hurricane season.

Excluding Guyana, the Caribbean economy is expected to contract by 3 percent in 2020, according to the World Bank.

“We’re not fooling ourselves. We fully expect to see a slow return of travel,” said Frank Comito, the chief executive and director general of the Caribbean Hotel & Tourism Association, which represents 33 national hotel associations in the region.

As countries reopen, most are mandating face masks indoors and social distancing.

As governments have clarified their policies, airlines, including American, Delta, JetBlue and Southwest, plan to resume service to many Caribbean destinations in July.

When they do, they’ll be flying into a hurricane season that the National Oceanic and Atmospheric Administration predicted could be above normal. In May, it forecast 13 to 19 named storms, including three to six major hurricanes at Category 3 and above.

Public fights over masks have become the new American pastime.

On any given day, somewhere in the United States, someone is going to wake up, leave the house and get in an argument with a stranger about wearing masks.

Rules on masks are left up to state and local governments, but enforcing them often falls to store and restaurant employees. Grocery store managers are training staff on how to handle screaming customers. Fistfights are breaking out at convenience stores. Some restaurants even say they’d rather close than face the wrath of various Americans who believe that masks, which help prevent the spread of coronavirus, impinge on their freedom.

Joe Rogers, 47, of Dallas, said he had gotten in a physical fight last week over masks.

“I wear a full face guard, the mask that they use when they spray pesticides,” he said. “He reached for my mask and tried to pull it off.” Mr. Rogers said his “natural instinct” came out and he put his hand up and knocked the man to the floor.

Gov. Gavin Newsom of California ordered the mandatory wearing of masks in public on June 18. A little more than a week later, Hugo’s Tacos, a taqueria with two locations in the Los Angeles area, announced that it would close temporarily because its staff was “exhausted by the constant conflicts over guests refusing to wear masks.”

Bill Kohne, the chief executive of Hugo’s, said that it was only in the last few weeks that the encounters had become so vitriolic.

“The one that we most viscerally remember is that a customer at the pickup window who was asked to wear a mask literally threw a cup of water through the window at the clerk,” Mr. Kohne said.

Time to give your home a good scrubbing.

There’s no way around it: When you rarely leave home, things get dirty faster. Here are some tips for a good deep-cleaning.