By Peter Allen for MailOnline

Conor McGregor ‘exhibited his private parts’ to a young married woman as she entered a bar toilet on the holiday island of Corsica, it was claimed today.

France 3 Corse – the major TV broadcaster in the area – said it had spoken to a friend of the alleged victim of the seedy incident which led to the Ultimate Fighting Championship star being taken into police custody last Friday before his release on Saturday.

He is now waiting for the results of ‘key physical tests’ and ‘the examination of film evidence’ before learning whether he will be re-arrested over alleged sexual assault and indecent exposure.

The alleged victim has claimed the 32-year-old Irishman showed off his manhood and then assaulted her following a heavy drinking session in the upmarket port town of Calvi on September 6.

Conor McGregor (pictured left and right in Calvi, Corsica) is waiting for the results of ‘key physical tests’ and ‘the examination of film evidence’ before learning whether he will be re-arrested over alleged sexual assault and indecent exposure 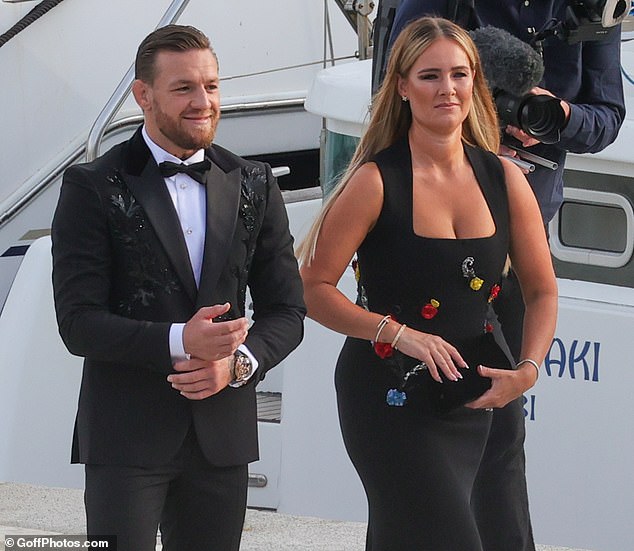 The MMA fighter was in the region to take part in a voyage to raise awareness of water safety. Here he is pictured with fiancee Dee Devlin in Corsica

A France 3 Corse report reads: ‘According to a witness who spoke with the complainant that same evening and whom we were able to question, McGregor, accompanied by his bodyguards, allegedly exhibited his private parts to the young woman without her consent as she made her way into the bar toilets.’

The source said what happened ‘deeply shocked the woman, who was on holiday in Calvi with her husband.’

The source said he had no information as to whether McGregor also assaulted the woman, who has not been identified.

As the alleged victim of a sex crime, she will be entitled to anonymity while pursuing her complaint, said the source.

McGregor was released without charge, but the criminal case is still active and he could be summoned before a magistrate later this week. 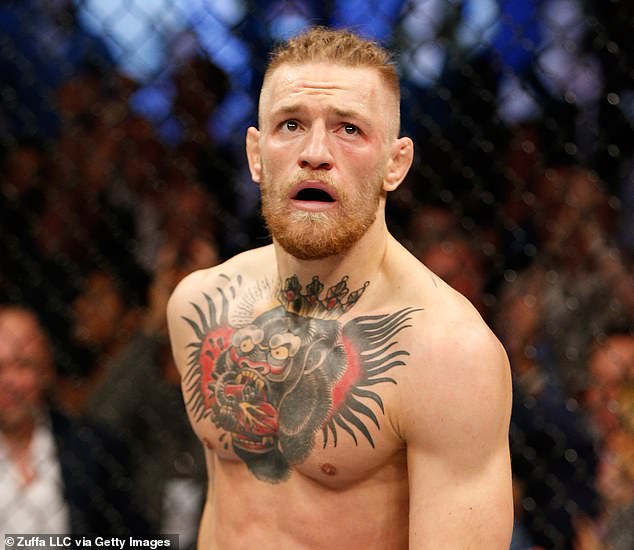 ‘Key physical tests were carried out on the suspect, but the results will not be known until after the weekend,’ an investigating source said on Sunday.

‘These tests are of a routine nature following incidents like this, but they take time, to make sure there is no doubt about them.

‘It is also possible that the incident being complained about was filmed. It took place in a very busy place, where fixed cameras are situated everywhere.

‘Lots of holidaymakers would also have been filming and taking pictures on their phones, so they also need to be spoken to.’

Tests for alcohol and drugs are common when suspects are arrested by police in France, especially following accusations of assault.

High Corsica, the area in which Calvi is situated, is also a Coronavirus red zone where cases are on the increase.

Formal allegations were made against McGregor to police last Thursday, by an as-yet unnamed complainant, believed to be the woman victim.

This led to police raiding McGregor’s £3million yacht, which was named locally as the ‘Dave Ocean’, the next day. 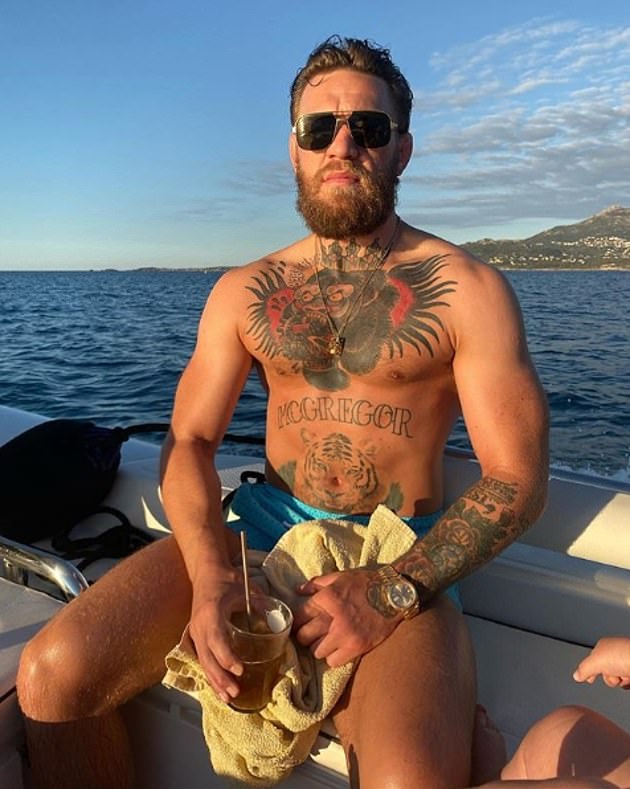 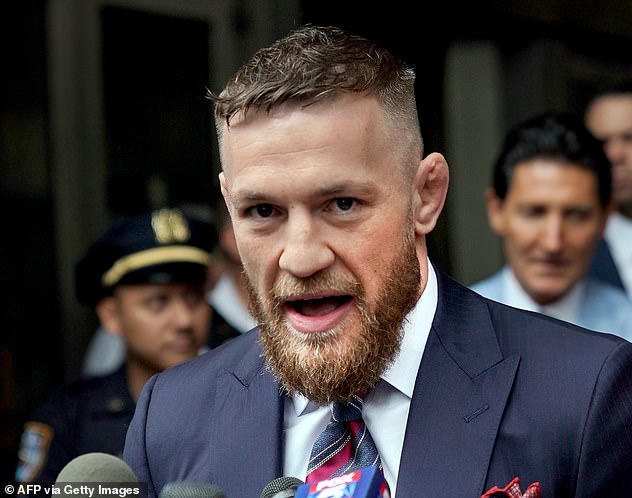 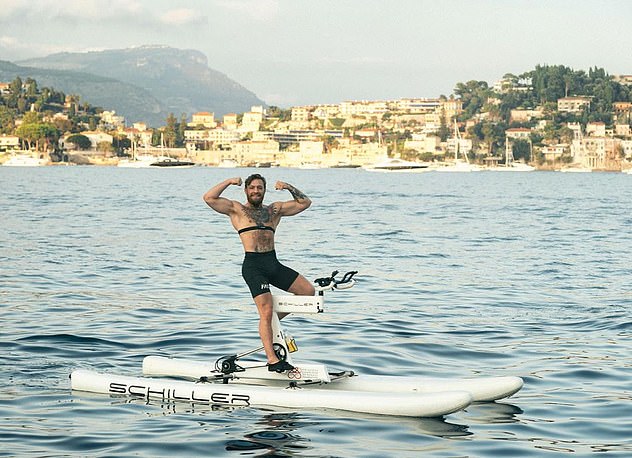 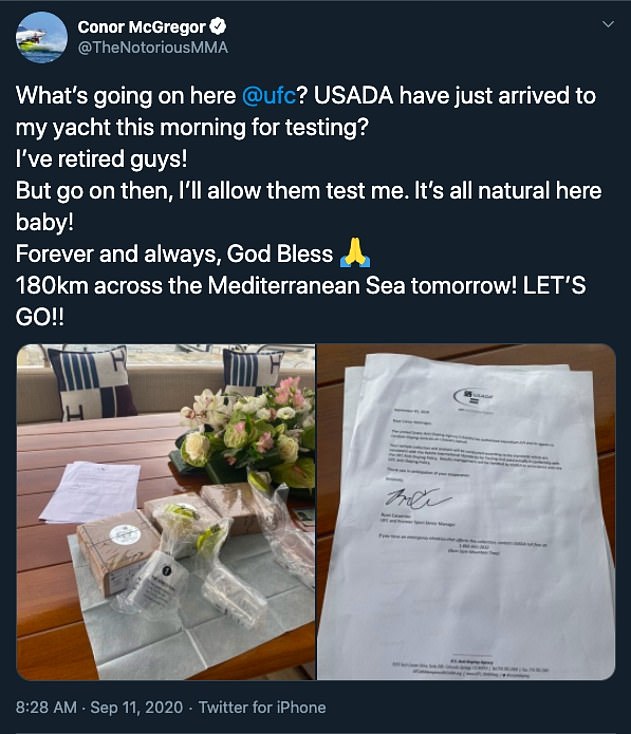 Brooklyn bus attack – McGregor assaulted a vehicle full of fellow UFC fighters in 2018. He pleaded guilty and was ordered to do community service

Threatening to kill people from Jose Aldo’s city – Before his fight with Aldo in 2015, McGregor said: ‘In previous times I would invade his favela on horseback and would kill anyone who wasn’t fit to work’

Arrest for stamping on a fan’s phone – McGregor was placed in custody after being accused of stamping on the phone of a fan in Miami last year – the charges were dropped against him.

McGregor made his way to the local Tramariccia Gendarmerie by bike on Friday, surrounded by bodyguards, and was then grilled by an examining magistrate and judicial police.

‘The suspect was arrested and placed in custody by the judicial authorities,’ said a spokesman for the Bastia prosecutor. ‘He was released on Saturday.’

There had been a complaint pointing toward ‘sexual assault and indecent exposure,’ said the spokesman.

French police can hold a suspect for an initial period of 48 hours before having to apply for an extension to custody, charge them, or release them.

In this case McGregor was released, but the case has not been closed, and there may be further action, the spokesman confirmed.

‘He has been released before the legal end of police custody and without any judicial review,’ said Mr Ramon.

Audie Attar, McGregor’s manager, said in a statement: ‘I am irate and putting out a warning loud and clear: Conor McGregor is not and will not be a target for those seeking to score a headline or a payday.’

McGregor was staying on his yacht in Corsica with his girlfriend, Dee Devlin, and their two children.

Since his brush with the law, he has been seen out running around Calvi.

McGregor had been preparing to take part in a 180-kilometer, 24-hour charity water bike race from Calvi to Monaco.

Princess Charlene of Monaco would have been alongside him to help promote water safety, but McGregor has now been forced to withdraw.