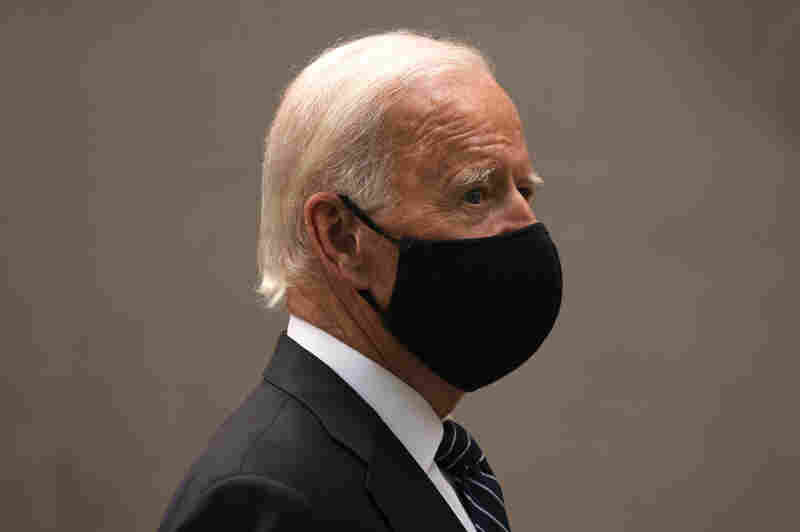 Democratic presidential nominee Joe Biden is pledging to dismantle the sweeping changes President Trump has made to the American immigration system, if he wins the White House in November.

But that’s easier said than done.

“I don’t think it’s realistic that Biden in four years could unroll everything that Trump did,” says Sarah Pierce, a policy analyst at the Migration Policy Institute, a nonpartisan think tank in Washington, D.C.

“Because of the intense volume and pace of changes the Trump administration enacted while in office, even if we have a new administration, Trump will continue to have had an impact on immigration for years to come,” Pierce says.

The Trump administration has undertaken more than 400 executive actions on immigration, according to the Migration Policy Institute. Those include tougher border and interior enforcement, restricting asylum, rolling back Deferred Action for Childhood Arrivals (DACA), slashing refugee visas, streamlining immigration courts, and creating Remain in Mexico.

“What the administration has sought to do is to simply turn off immigration and to do it unilaterally by presidential edict, without the approval of Congress or the consent of the American people,” says Omar Jadwat, director of the ACLU’s Immigrants’ Rights Project. “That project should be reversed.”

That’s exactly what Biden pledges to do. His position paper on immigration — 51 bullet points that fill 22 pages — seeks to roll back Trump’s accomplishments, and re-enact Obama-era policies.

“If I’m elected president, we’re going to immediately end Trump’s assault on the dignity of immigrant communities. We’re going to restore our moral standing in the world and our historic role as a safe haven for refugees and asylum seekers,” Biden said in his acceptance speech at the virtual Democratic National Convention.

The former vice president has an exhaustive to-do list. Within his first 100 days, Biden says he would implement a wide range of policies: not another mile of border wall, no more separating families, no more prolonged detentions or deportations of peaceable, hardworking migrants.

Biden also says he would restore the asylum system and support alternatives to immigrant detention, such as case management, that allow an applicant to live and work in the community while their case works its way through the hearing process. Trump has derisively called this “catch and release.”

And Biden would fully reinstate DACA, which allows migrants brought to the U.S. illegally as children to live and work without fear of deportation. 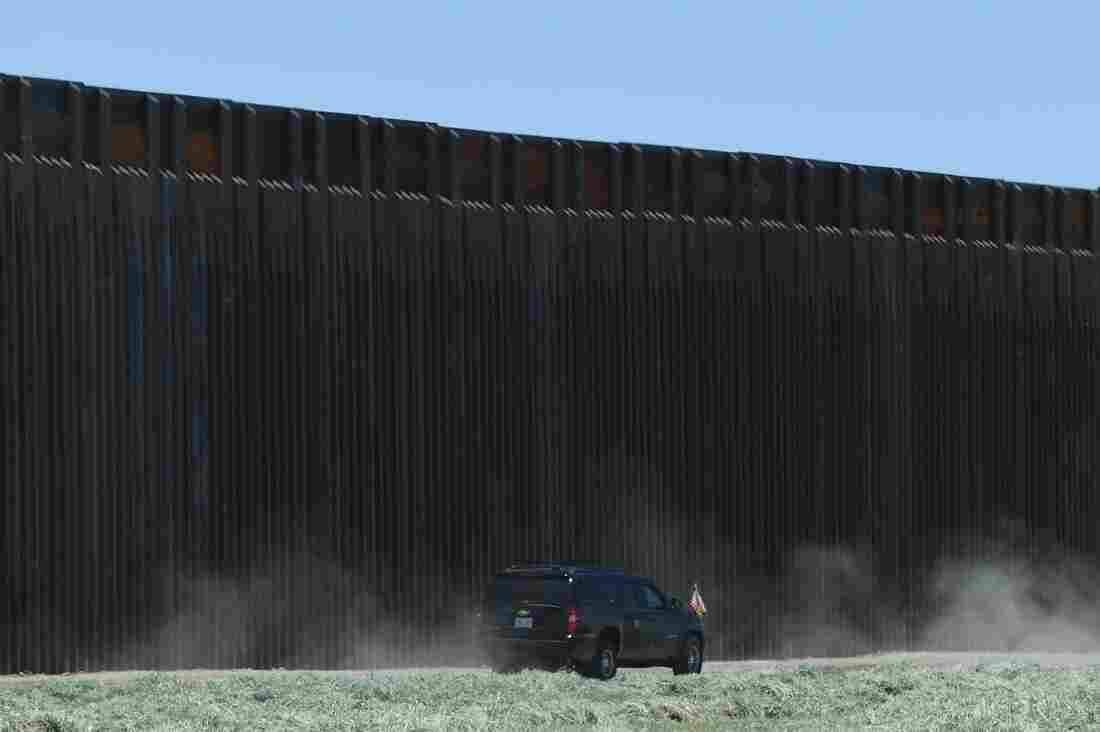 A car with President Trump drives after participating in a ceremony commemorating the 200th mile of border wall at the international border with Mexico in San Luis, Ariz., on June 23. Saul Loeb/AFP via Getty Images hide caption

But if he’s elected, Biden would face a host of obstacles that could slow his immigration counter-revolution.

First, there’s the specter of renewed chaos at the Southern border. Last year, groups as large as 1,000 Central Americans at a time waded across the Rio Grande into El Paso, Texas, to request asylum. The Border Patrol was overwhelmed, and ended up detaining families in primitive, unsanitary conditions. Immigration hawks are wary that Biden would throw open the gates again.

“They don’t want to create such a chaotic situation at the border by welcoming or incentivizing another massive influx from Central America,” says Jerry Kammer, who is affiliated with the Center for Immigration Studies, which favors restrictions on immigration.

Federal border officials are worried what would happen if Biden cancels bilateral agreements with Mexico that have dramatically slowed the migrant flow.

“If Mexico right now decided they weren’t going to continue to help us, people would start coming through like we saw in the caravans two springs ago. There’s no reason that it wouldn’t come back as bad as it was,” says Ron Vitiello, former deputy commissioner of U.S. Customs and Border Protection.

NPR asked a senior adviser to the Biden campaign what would happen if a new president gave migrants a green light. The advisor said they are cognizant of that “pull factor.”

In fact, the people most closely watching to see if Biden defeats Trump and reverses his immigration crackdown may be beyond U.S. borders.

Some 700 migrants languish in filthy tents pitched in a public park amid mud, rats and clouds of mosquitoes. The encampment is in Matamoros, just across the Rio Grande from Brownsville, Texas. They’re seeking asylum in the U.S., but stuck there under a Trump initiative known as Remain in Mexico.

“We place our hope in Joe Biden, who is the Democratic nominee, because he would treat the immigrants very differently than Trump has,” says Carla Garcia, speaking at her cluttered campsite. She and her 7-year-old son are seeking protection in the United States after fleeing criminal gangs in Honduras.

“We hope he wins and changes all of this that Trump has created,” Garcia says, motioning to the bedraggled camp. “This is discrimination and racism.” 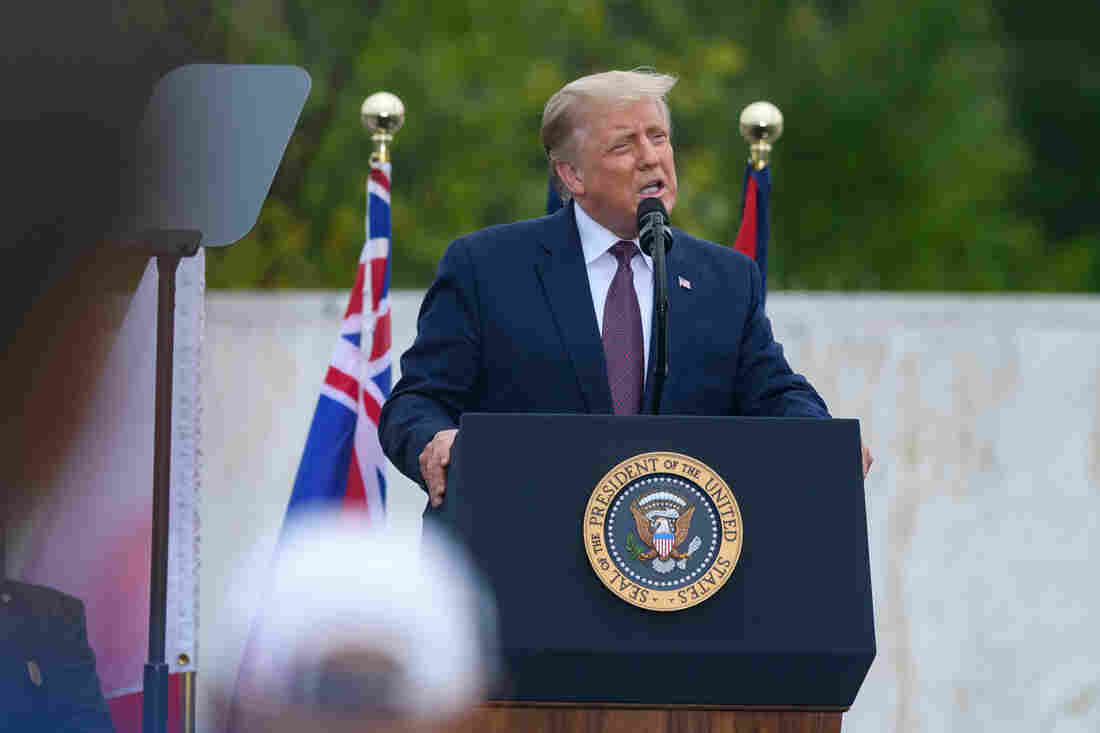 For his part, the president is touting the success of Remain in Mexico, which the administration calls the Migrant Protection Protocols.

“We don’t want ’em here. We want ’em outside,” Trump told cheering supporters in Yuma, Ariz., last month. “We got sued all over the place, and we won. So now they don’t come into the United States. They can wait outside.”

While the president says he has single-handedly restored a broken immigration system, human rights advocates are appalled at what they call the cruelty of his policies. And immigrant advocates say they have high hopes that a new administration would rebuild the immigration system based on “American values.”

“There’s no doubt about it, this is a monumental challenge,” says Heidi Altman, director of policy for the National Immigrant Justice Center. “That means a complete and utter reorientation of the culture of the agencies that administer immigration law and policy in the United States.”

But that’s a tall order — and another obstacle Biden would face. Immigration agents have enjoyed extraordinary support from the White House over the past 45 months. The Trump administration has bragged about “unshackling” them to let them do their jobs more aggressively.

“That isn’t something that’s a light switch. You can’t change culture within an organization that vast overnight,” says Angela Kelley, senior adviser to the American Immigration Lawyers Association. “So I agree that it’s going to be a long, long road.”

For an example of how the Border Patrol is marching lockstep with the White House, look to a video titled “The Gotaway,” posted earlier this month.

CBP produced an ominous, fictionalized video on the Border Patrol’s YouTube channel that depicts a Latino migrant who had just escaped from agents, attacking and knifing a man in a dark alley. The video was released at a time when Trump has been stoking fears about violent immigrants at his campaign rallies.

NPR inquired why the video was made and why it was removed a week later before being re-posted. Border Patrol Chief Rodney Scott said in a statement that the video was produced “to enhance awareness that effective border security helps keep all Americans safe,” and it was briefly pulled because they misused copyrighted materials.

A Biden presidency also would likely find itself skirmishing with conservative lawyers the way the Trump administration has been tied up in federal courts fighting immigrant advocates.

“If Biden is elected and his administration starts rescinding executive actions that Trump had firm legal authority to do, groups like us will sue. That is a fact,” says R.J. Hauman, head of government relations at the Federation for American Immigration Reform. “We did so under President Obama, and we’ll do so again.”

Finally, there’s the pandemic. An NPR/Ipsos poll shows that a majority of Americans support Trump’s decision to shut the nation’s borders to all types of immigrants to stop the spread of the coronavirus.

Biden has not said if he would reverse that order to reopen the borders and jump-start the asylum process, which has been suspended. So it’s anybody’s guess when the virus will subside and the nation can welcome immigrants again.