‘Was I live then? Oh, good’: Awkward moment Scott Morrison mutters to himself during bungled TV interview with Allison Langdon

Scott Morrison has been caught in an awkward moment when he failed to realise he was live on-air during an interview on breakfast television.

The Prime Minister had just been miked up for his live cross with Channel Nine’s Today show on Wednesday morning when the segment encountered technical difficulties.

Today host Allison Langdon informed viewers they would be doing a live cross to Canberra where Mr Morrison was standing by.

‘A good morning to you, Prime Minister,’ she began. 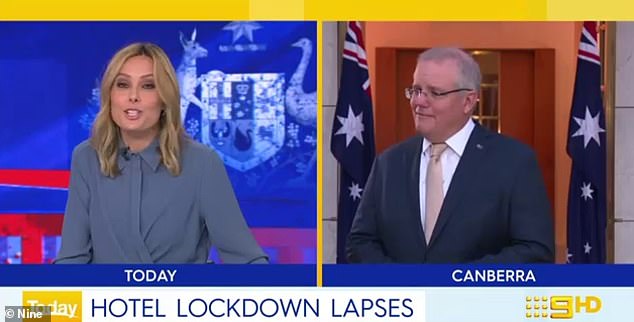 Vision appeared of a Rydges Hotel in Melbourne instead of the live cross to Canberra.

‘Hello, Prime Minister, if you’ve got us,’ a confused Langdon continued.

Mr Morrison finally appeared on screen with a blank expression.

‘Ah, nice to see you. We’ve only just miked you up,’ Langdon said.

A distracted Mr Morrison looks around, appearing not to realise he was already live on air. 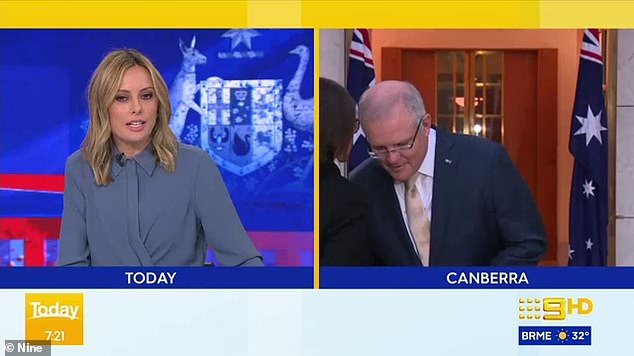 ‘Prime Minister, can you hear me?’ Langdon asked.

‘Was I live then? Oh, good,’ Mr Morrison replies before a producer appears on screen to speak to him.

Langdon said: ‘These are the joys of live television, everyone. Prime Minister, can you hear me OK?

‘We’re not hearing from the Prime Minister at the moment. We will come back to him after the break.’

Three minutes later Mr Morrison appeared again and was able to restart the interview with a working microphone and camera feed.

The Prime Minister then praised Victorian Premier Daniel Andrews for his reaction to a recent spike in coronavirus cases and said the state had his ‘full support.’