Despite an end to the federal stimulus measures that have propped up consumer spending, retail sales climbed for the fourth straight month in August, extending a bounceback that has lasted longer than many economists had expected.

The gains, however, were smaller than in previous months, which some economists warned could be a sign that the retail recovery was running out of steam.

Retail sales rose 0.6 percent last month, the Commerce Department reported on Wednesday, and the 1.2 percent increase in July was revised down to a 0.9 percent gain. Still, Americans continued to spend on home computers, new cars and online groceries, and some retailers serving those pandemic-related needs reported record sales.

“The easy gains of reopening are behind us, and the down-side risk of slower growth is emerging,” said Scott Anderson, an economist at the Bank of the West. 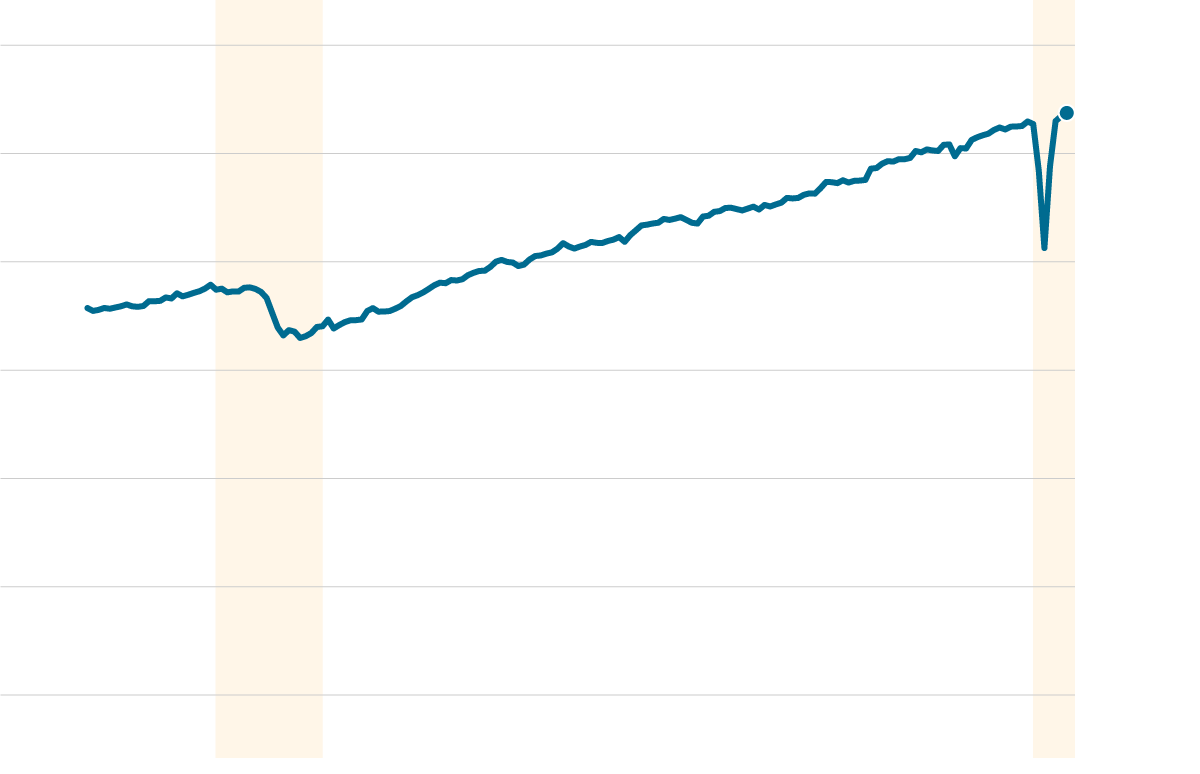 The slower rise in consumer spending in August occurred against a grim economic backdrop that grew even darker as the $600-a-week supplemental unemployment assistance expired and Congress failed to agree on new stimulus measures. Unemployment declined, but stayed high as huge sectors of the economy — like hospitality, food service and travel — remain largely shut down.

The slight monthly sales increase — many economists had been predicting a higher number — showed just how vital that government assistance has been in raising incomes. The latest sales data is likely to amplify calls for Congress to pass another round of stimulus before the November election.

Latest Updates: The Coronavirus Outbreak and the Economy

“I think it will be much more difficult to see these gains going forward given that unemployment benefits have expired,” said Gus Faucher, chief economist at the PNC Financial Services Group.

Still, the level of spending over the past four months has surprised some experts, even when factoring in Americans’ seemingly unwavering propensity to shop.

There were a few factors that likely converged, including stock market gains that increased purchases among wealthy spenders and money that people in the lower-income bracket had been saving from their $600 weekly assistance, which ended on July 31.

The recovery continued to be strong for some retailers, while others have struggled, casting national chains into buckets of pandemic winners and losers.

Most apparel chains and department stores have seen sales tumble during the pandemic. In the past six weeks, Lord & Taylor and Century 21, a staple of bargain apparel shopping in New York, joined the growing list of retailers that have filed for bankruptcy in recent months. Both plan to liquidate.

Yet, chains like Best Buy, Dick’s Sporting Goods and West Elm have reported revenue jumps this summer, with many Americans spending more on goods that they could use at home or while socially distancing outdoors. Dick’s reported a record quarter last month, fueled by outdoor activities like golf, camping and running.

“When you look at the numbers, it was V-shaped,” Sucharita Kodali, a retail analyst at Forrester Research, said of the recovery. “It was just extremely poorly distributed across different sectors.”

While categories like clothing stores and restaurants and bars posted increases in August, they were still down from where they were a year earlier: clothing by 20 percent, and restaurants and bars by 15. Conversely, grocery store sales declined 1.6 percent in August, but were 9 percent higher from a year earlier. Furniture and home furnishing stores posted a 2 percent increase in August and were up 3.8 percent from a year ago.

Back-to-school shopping — which normally takes place in August and September — was likely diminished this year, as families navigated remote learning plans and spent less on new apparel and backpacks for their children.

Michael Gapen, an economist at Barclays, has been surprised by how much spending has migrated from one sector of the economy to another. Instead of going to restaurants, people bought more groceries and liquor. They took on home improvement projects or bought new cars instead of spending that money on travel.

Mr. Gapen attributes this shift partly to resilient consumers, but also to businesses that have found a way to deliver goods to people’s homes.

“It’s the Amazonification of the world that has facilitated this,” he said. “If this pandemic hit 10 to 15 years ago, I am not sure we would have been able to make this shift. It reflects how nimble certain businesses have become.”

When the pandemic closed offices, hotels and restaurants across New York this spring, Baldor, a food service company supplying these industries, was in trouble.

Nearly 90 percent of its revenue was gone and the company had $10 million worth of food inventory and very few customers. The company, based in the Bronx with about 2,000 employees and 400 trucks, quickly figured out how to pivot and start delivering food to people’s homes instead.

“It was a matter of life or death, to be honest," said Ben Walker, vice president of sales and marketing at Baldor.

Mr. Walker said the key to the company’s ability to adapt was that it modernized its online presence a few years ago, allowing restaurants and other food service customers to pay with credit cards. The website, which features high-quality photos of fresh food, allowed Baldor to transition relatively smoothly to retail customers during the pandemic.

Still, the company’s adaptation is not a complete replacement for its old business. Sales are still down about 25 to 30 percent from before the pandemic. Even though restaurants are coming back, hotels and office cafeterias are still largely closed. Some may never reopen.

“We are in this for restaurants and hotels,” Mr. Walker said. “That is what we are built for.”

Economists say the full impact of these types of closings in the consumer economy may not be felt for several months, when the aftereffects of the stimulus measures wear off. The first to pull back on spending will be the unemployed. But even those with jobs may start to lose confidence in the economy and stop buying as much.

Mr. Anderson, of the Bank of the West, said many consumers, who have kept making big purchases and renovating their homes, may not have fully realized the economy’s fragility, but they inevitably will.

“I think there is a bit of deer-in-the-headlights phenomenon,” Mr. Anderson said. “People are having trouble wrapping their minds around the extent of the economic losses.”